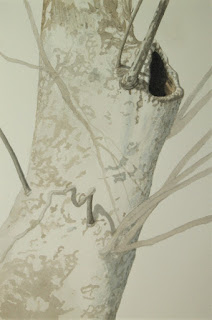 These trees are one of my favorite with their unusual bark and majestic form. This tree has lost a limb from the one side, probably during an ice storm. Some storms over here have been known to fell whole trees when the ice gets really thick, a sudden loud crash and the tree is down! This one though still stands and the resultant hole will be used for nesting birds or perhaps a grey squirrel, This feature was something I wanted to include in the painting but the main attraction though was sunlight on the bark and the resulting shadows from all the branches. So far I'm trying to establish a sense of light and shadow then once I have that down, I'll finish the mottling of the bark and the other branches.
Posted by Jeremy Pearse at 6:37 PM