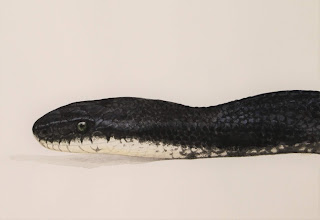 I recently found a Black Snake over in the reserve, it was sunning itself on the rocks of a broken down wall that were once outbuildings next to the old white farmhouse. Only the foundations remain now but this is a favored place of mine to visit where I can usually sit quietly for awhile and observe the comings and goings of wildlife. Since this snake was quite tame, I was able to do a few pencil studies in my sketchbook along with some photos. I did the watercolor study shown here when I got back in the studio. Black Snakes can range from tame to aggressive, some I have been able to gently stroke - others react violently to any touching and attempt to bite. We once had a particularly tame individual that lived under our front porch, I named him Ding Dong - for reasons I won't go into here. He lived happily for awhile probably feeding on mice etc - he once tried for one of my goldfish in the pond but I was having none of that! Then one day he strayed and was caught up by the community mowing machine and that was the end of him. RIP Ding Dong.
Posted by Jeremy Pearse at 8:17 AM

I do miss him!