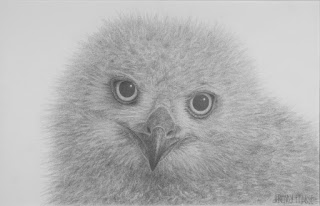 A few months ago we noticed that a Raptor show was coming to one of our local parks here in Maryland so on that weekend we went over to see what was happening. Very well attended, we had to park some way away then walk to where all the action was. There were about 6 or 7 falconers there giving talks or showing birds. Some sat on bow perches in a roped-off area, others were in boxes to be brought as necessary. I managed many photos and some of my watercolor sketches are below. 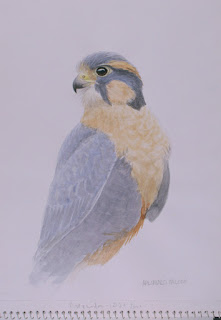 This Aplomado Falcon was lovely to look at and draw. She was flown a few times and was incredibly lithe in the air. Quick, long-winged and very agile swooping about the sky - wonderful to watch! 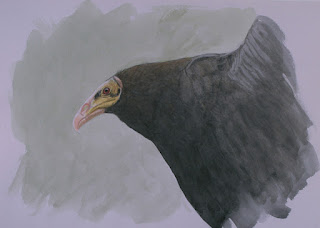 This Yellow-headed Vulture was another interesting bird and is just like our Turkey Vulture but is yellow on the head instead of being red. There were a number of owls too including Great-horned, Screech, Long-eared, European Eagle Owl and the star of the show - a beautiful well-marked female Snowy Owl. Hawks included Red-tailed and Harris Hawk plus there were plenty of others too. Inside in a soft-lined box was another surprise - 2 European Eagle Owl chicks! Incredibly cute and occasionally giving 'screesh' begging calls. It was too crowded in there to do any sketches so I did the above drawing at home in my studio later on. It was certainly a morning well spent and I now have plenty of sketches and photos to draw from for future work.

Superb raptor artwork. I don't believe that I have ever seen an Aplomado Falcon, even in captivity. I did get to see Yellow-headed Vulture in the Amazon. Even the Turkey Vultures there look quite different than North American T. V.'s I do not know if they are considered a different species.