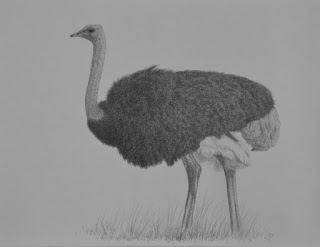 I'm slowly catching up posting some of the work that has been recently finished here in the studio and further afield. Going back to my recent South African trip, the ostrich is a bird quite often seen when driving through some of the less settled areas but these aren't truly wild birds, rather ones that have escaped from ostrich farms. When we visited Qwantani (see earlier blog) we saw quite a few of them and one morning 3 were on the grounds feeding around the chalets (one male and two females). When I stepped out for a closer look, all three headed in my direction and two ended up standing on the stoep itself! Not exactly wild birds then - obviously used to hand-outs from visitors. At first I was a bit wary as the males can be dangerous during the breeding season. But they only seemed to be interested in food so I managed some incredible close-ups with my digital camera and later drew this male as I had seen it the day before walking through the veld. Close up they are very impressive birds and have wonderfully long eyelashes! The males wing feathers are white while the tail is a warm reddish-grey - the females an overall greyish-brown. An amazing bird with very powerful legs and feet too! One of these days I'll probably do an African landscape with ostrich striding through just as I saw them. Ostrich study above - graphite on paper (sketchbook), 7" x 9".
Posted by Jeremy Pearse at 5:23 AM

Great drawing.
In Uganda I had a semi-tame male ostrich come running up to me. I was worried that it might me aggressive. It stopped about 8 feet from me, did a strange dance, and turned around and ran off. I also enjoyed seeing them in Kruger.

Great story John! Until they come really close, you don't realize how imposing they can be.

I remember being surprised by an Ostrich which popped out from behind a bush at a picnic area at a Reserve near Cape Town.

It frightened the life out of me....