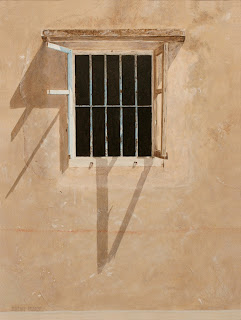 This painting is the second or third version that I did of a window that I used to pass every day on my way to the island ferry while living on Lamma in Hong Kong. One day in the afternoon, I noticed how the sun created these exciting shadows against the wall and I knew that I had to paint what I saw. A few drawings were done on site then a larger watercolor study. I did the first version using acrylic on board that sold soon after I had painted it. Then quite a few years later did this one on gessoed watercolor paper. I made the window slightly less rectangular than in the original and kept the work relatively small but still hope to do a large version someday. The painting has hung over our bed since then and is still one of my favorite. I feel that I came as close to saying what I wanted to say with this work than with any other that I have painted. Recently I took it out of the frame as there were a few areas that I wanted to work on. Washes of acrylic had settled into the texture of the paper creating an even mottling effect that I didn't like so I carefully painted over this making it much less noticeable. I also slightly darkened the area surrounding the window so there was less of a contrast then slightly lightened some areas on the wall. The shadows were made slightly warmer and the bars slightly more grey-blue than they had before. Finally happy with the update, I re-photographed the painting then put it back in the frame. The area that this window came from has seen many changes and this building has long since been destroyed. I am really glad that I took the time and effort so many years ago to document the many architectural details of the surrounding buildings as most all of these old Chinese houses are gone.
Posted by Jeremy Pearse at 8:02 AM