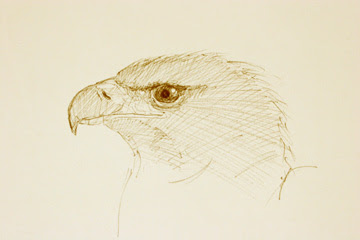 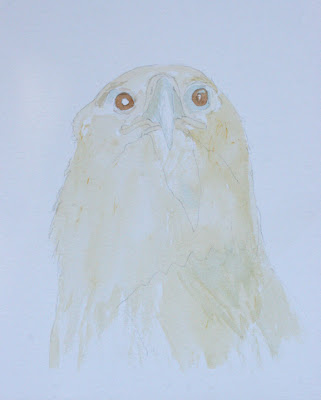 This series of young Bald Eagle paintings all started some time ago when I was in Florida and happened across an immature Eagle. At the time I only had a ballpoint pen at my disposal so after grabbing a sheet of regular paper (from where I cannot recall) I quickly drew the head trying all the while to capture the essence of the bird. More sketches followed and later this was pasted into one of my regular sketchbooks. The head sketch appears above followed by the initial stage of a small watercolor. I decided on a head-on pose as I wanted to capture the penetrating gaze that I felt whenever this eagle looked directly at me. After a quick drawing, I washed in some raw-sienna followed by burnt umber for the eyes. A little cerulean blue did for the soft part around the eye on the right then I let things dry off. Next I'll work a bit more on the underlying washes which are often so important for a watercolor.
Posted by Jeremy Pearse at 8:07 AM