ALONG THE COAST, PART 5 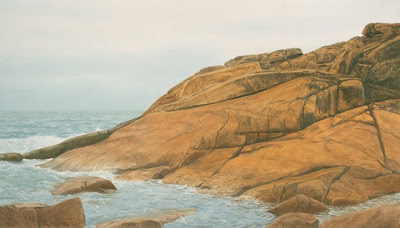 The foreground water and rocks have been added bringing most of the painting to completion. I have darkened the main area of rocks slightly and lightened the longer rock just under the breaking wave as I felt that it attracted too much interest being as it was right next to the lightest lights in the painting. I'll probably frame it next then see how it looks in that before adding the final details. That will have to wait for a bit until I take care of a larger commission first - more on that painting later. Suffice to say that I have done a few smaller studies and those have worked out well so let's hope that the larger painting will too!
Posted by Jeremy Pearse at 4:05 PM

Jeremy, I'm a sucker for scenes featuring rocks and water and this is one is terrific. I'm waiting patiently for the sea bird to make an appearance!

This turned out great! Will there a bird of prey floating somwhere or a shore bird?

Thanks Pete and Vernon for your very perceptive comments! Yes, there will be a bird in the scene as soon as I can get back to the painting. As to the species, well you will have to wait a bit for it to appear! I've been away and need to catch up on a few things before getting back to the work - but hopefully soon:)

Jeremy, did I already ask you what weight and texture of watercolor paper you use. I love the way you layer and want to incorporate those techniques in my work.

Hi Vernon, yes I think we did talk about that but I'll gladly return to the subject again. I usually use hot-pressed paper for smaller watercolors and anything that has finer details that I want to capture. Other than that, I use just about whatever I can find but prefer Arches 140lb cold-pressed for most of my work. I seldom use rough paper unless I am working on a full sheet then usually go with 300lb as I don't have to stretch the paper then and it's easier to move the sheet around as I work. In some of my earlier blogs I talk about the way that I use washes etc along with a few demonstrations, perhaps that would provide some insight as to how I work but will gladly provide more if you need it. Thanks and take care!

Thanks for taking the time to answer this again, I'd forgotten we addressed this earlier. You have a beautifully done red tail hawk where you layered the peice. Happy painting!!!!!