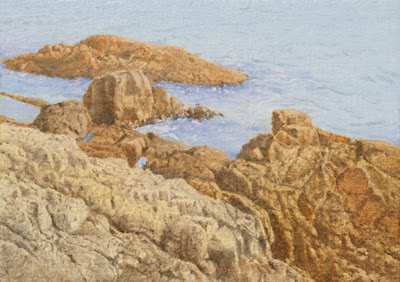 Keeping with the seaside theme for the time being, this is another small study I recently finished. There was something special about the light and texture of these rocks which I wanted to try and capture. I found the scene most attractive with different patterns that they formed along with the gentle swell of the sea. This oil was done on a 5" X 7" gesso-primed board (as was Coastal Mist posted earlier) - a surface I am not entirely happy with. Perhaps it is just a matter of getting used to the smoother surface - this should come I suppose as I spend more time using them. In the past I mostly used canvas for my oils but the other day I remembered that I had some smooth un-primed canvas stashed away somewhere and thought that it was time to get it out, slop on a couple of coats of gesso and use it for smaller studies. Well I did find the canvas along with some un-primed linen - Hmmm... Thinking back a few years ago, I remember doing a few paintings on linen but for some reason didn't keep at it so along with priming the canvas, I did a few small pieces of linen at the same time. Well, to make along story short, the resulting work completed on that linen board was all that I could have asked for in a painting surface! And the painting came out great too! I was very happy with how the paint laid on the surface and will definitely be using more of it. I'll show you that painting sometime soon when I get through posting the rest of the earlier studies I did from California.

Posted by Jeremy Pearse at 1:46 PM