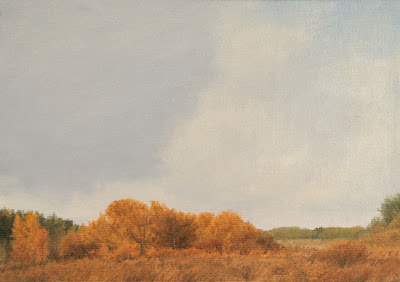 Although being very busy working towards the Waterfowl Festival next weekend in Easton Maryland, I have found some time to get out with my easel and paintbrushes. Weather has generally been good with warmish temperatures and for the most part, rain has held off - at least while I was out and about anyway! The skies have been fantastic, mostly overcast with breaking sun and shadow lending to many wonderful moods. I sat on the top of a nearby hill and just watched the clouds pass by. Wind was strong higher up but much less so where I was and created many different patterns as the drama unfolded. I'll post some of the other paintings I did from that day later on but for now, here is a small 5" X 7" study finished when the sun broke through the clouds and lit the Autumn landscape.
Posted by Jeremy Pearse at 7:29 PM

Thanks Eric, I checked out your blog and it seems you love plein air painting too - good luck!

I bought this painting for my husband (special birthday present)at the McBride Gallery in Annapolis. It joins a couple of other pieces by you but this one might be our favorite. It is serving as a placeholder for the view we hope to one day share out of our windows.

Hi Beth, and thanks so much! I don't post or exhibit all of my smaller studies and plein air paintings but you have certainly inspired me to do more!