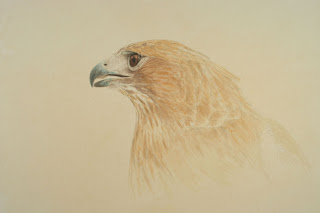 Here I have continued modelling the bird working mostly all over at the same time. A series of thin washes has brought me up to this point with darker detailed areas such as the eye and beak done with a finer brush. I'm happy with the way the painting is going even in this rough stage as in the past I would usually work on one area such as the eye until it was finished. I sometimes felt that I was otherwise loosing control of the work unless I could see that at least some part of the painting was working as I intended. Now I know that I can bring it all together in the end so don't have to worry about areas that aren't quite as I would like them to be. Most of the washes so far have comprised of Raw Umber and a little Burnt Sienna with some Cobalt on the beak. I have further modelled the eye using Burnt Umber and darkened the pupil and surround with Neutral Tint. Still a way to go but a good start so far.

Posted by Jeremy Pearse at 9:55 AM