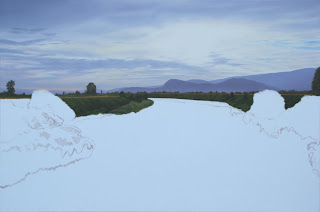 After evaluating the sky, I feel that I should add some of the darker tones at this point so that I can better judge the overall tonal value and see how that is developing as it these deeper tones that are integral to the painting. I first do some more work to the mid-ground using various shades of bluish-purple then start on the riverbanks. Here I mix different amounts of permanent green, yellow ochre and raw umber then indicate grasses and some of the smaller bushes before putting in the two trees on the left and part of the one on the extreme right. So far there is a good sense of depth and I feel that the work is coming along fine but I also realise that I will probably have to spend some time later on with subtle glazes to bring out the correct tones. I don't want to go too dark at the beginning then have to repaint some areas to make them lighter later on.