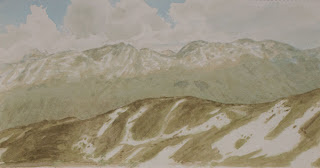 About a two hour drive north of Vancouver is the village of Whistler. Initially only a winter resort, the village now has about 10,000 residents which swell by many thousand more during the peak season. We visited Whistler last week and I was treated to many spectacular vistas surrounding the village and also on the drive up. After exploring a bit and watching some of the many mountain bikers, we took first a gondola ride up Whistler mountain (which goes about three quarters of the way) then an open ski lift to the top. I can't begin to describe how beautiful everything was. From the peak the view is simply incredible! There were many distant mountains to focus on, most of them capped with various amounts of snow. The sketchbook study above is from the end of the gondola ride looking North. While I only have studies to show at the moment, I'm sure that there will be many oils to come.
Posted by Jeremy Pearse at 6:50 PM