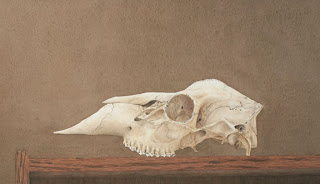 Referring back to my first blog, I briefly described the area around where I live and how this has influenced my work. While walking in the reserve a few years ago, I came across this deer skull lying in the woodland. At first I had thought that the deer had died a natural death (winter can be harsh on younger deer) but a bullet hole in the center of its skull told a much different story. Unfortunately some poaching does go on in the reserve and from time to time I hear gunshots coming from that area (I even found a hunting blind once). It was more recently that I found another deer skull lying next to the path which had had the antlers sawn off even though it was an immature deer probably only around a few years old. Still, I take my reference where I can find it. Skeletons of animals and birds are of great interest to me and I have drawn and painted them more than a few times. This deer skull above was an interesting study and I decided to paint it against a darker background which is somewhat unusual for me. One of the most fascinating experiences of the painting was discovering the intricate details of the skull along with the different tones and shadows etc. It was almost like a surreal landscape and I'm looking forward to painting this one again, but this time using a smoother paper and with a lighter background. "Deer Skull" is around 11'' X 18" and is in watercolour.
Posted by Jeremy Pearse at 3:27 PM