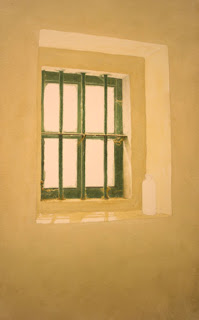 After yet more washes, I am feeling a little happier with the direction this painting is going. Adding more color has served to deepen the tones further and create more depth. There is certainly more of a sense of 'looking in' to the painting at this stage although the scene itself is pretty much two-dimensional. I don't plan on adding a landscape outside the window as this I feel would be a distraction - there will be plenty going on as it is. The sense that the painting is lit from the outside is becoming more apparent also and this is mainly due to the reflected light, the shadows (more obviously) and also light falling on some of the smaller objects such as the spider webs etc. I have continued to deepen the green of the window frames and bars which has also brought up the highlights of direct sunlight. Shadows are subtly diffuse as the window panes are slightly opaque and cut down on the sun's intensity. I'm still not decided about the bottle at this point so try to ignore the white space as I look a the painting from time to time while I go about other things in my studio. I am enjoying the painting process so far but don't want to rush it at this point and have to try to undo any mistakes.
Posted by Jeremy Pearse at 7:42 AM